An entity is equivalent to a collection in a NoSQL database or a table in a relational database. By default, a User entity is created for you. This entity will eventually help us handle authentication. But first, let's deal with the backend. The main entity will be used to store tasks created by users.

Amplication allows for granular permission to create, read, update, and delete entries in the different entities of the backend.

User's who will be creating tasks in the Todo app will need to be granted certain permissions to create, read, and update their tasks and prevent them from doing other things.

With a role for users of the Todo app created, we'll want to assign certain permissions to the Todo User role.

Amplication provides code sync with GitHub. We'll want to set this up with the repository we created in the previous step.

With the new Task entity created, and a relation with User's created, and connecting our project with GitHub. We're now ready to commit our changes and build the application.

On the right-side panel is the Pending changes where the changes to Task and User, as well as other changes, will appear. 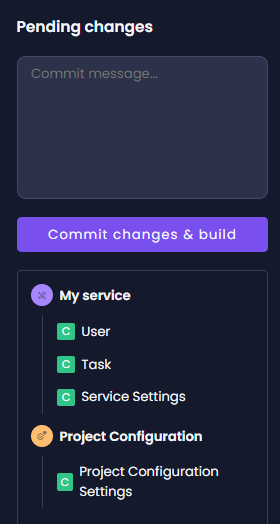 With our backend created and running locally, we're almost ready to link it to the frontend. First, we'll need to make some additions to the code.

To view the changes for this step, visit here.